How did the UK's new policy Bank come to support the first direct link between German and UK energy markets?

The UK and Germany are building a historic piece of infrastructure, an undersea energy link, which will be one of the largest in the world. The UK Infrastructure Bank is investing alongside a consortium of international organisations to get the project underway. In our first blog we set out more detail on why the Bank has chosen to support this project and its importance to the UK.

The new NeuConnect electricity interconnector will establish a direct link between the UK and Germany, connecting our electricity grids for the first time. Due to open in 2028, it is one of the largest and most significant infrastructure projects to be financed this year. As part of the £2.4 billion deal, it will receive £150 million lending from the UK Infrastructure Bank to help fund its construction.

The connection will facilitate the movement of surplus electricity between the two countries and allow both to maximise the generation and use of renewable energy sources such as solar and wind. By doing so, the project helps reduce emissions, supporting efforts to meet the UK's Net Zero 2050 target. 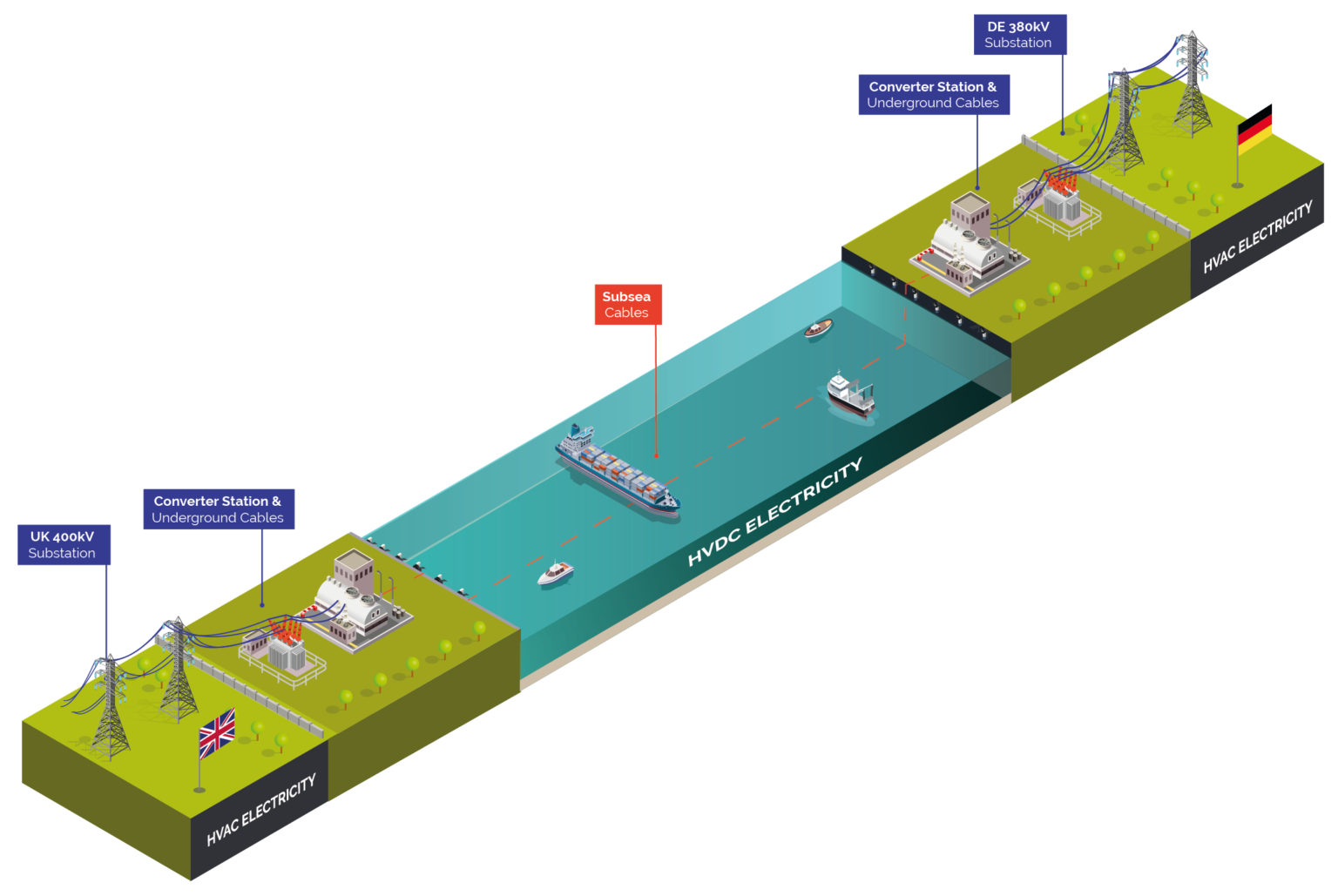 For example, if on a cloudy or calm day, our renewable sources are producing less electricity than expected, we could draw on surplus energy from Germany. And should our offshore wind farms be producing more energy than we will consume on a certain day, we could supply our neighbours in Germany, ensuring this valuable renewable electricity doesn’t go to waste. Over time, current assessments conducted on behalf of the Department of Business, Energy and Industrial Strategy suggest that the UK is likely to produce more electricity than needed, meaning in 2050 we can expect to be a net exporter of electricity to Europe.

This project puts the UK on track to meet government's ambition to double interconnector capacity by 2030 as part of its energy and net zero strategies.

More broadly, this project puts the UK on track to meet government's ambition to double interconnector capacity by 2030 as part of its energy and net zero strategies. Around 14% of the increase will be delivered by this project alone.

So where does the Bank come in? Described as a hidden "highway" of electricity, the interconnector is benefitting from amendments by the energy regulator Ofgem to enable project financed infrastructure under its "cap and floor" model. The regime sets an upper and a lower limit for revenues the project can generate. That protects consumers and also provides certainty for investors, but it is not without risk.

The Bank is playing an important role in both the construction and liquidity facility, providing necessary scale and flexibility to finance the project. Overall, a consortium of more than 20 banks has raised the vast £2.4 billion of capital to finance the construction of the electricity cable and converter stations in both the UK and Germany. A deal this size is unprecedented in the UK interconnector market to date.

The Bank's involvement also complements support provided project by other public lenders including the European Investment Bank, who are involved in the German side of the project, and Japan Bank for International Cooperation (JBIC) who are active in both the German and UK sides of the deal.

Facilitating private investment or being able to "crowd-in" is a key tenant of the UK Infrastructure Bank’s investment strategy, but it was not the only consideration for our Investment Committee.

The project also helps deliver on our strategic objectives and has tangible impact for the environment and communities across the UK. For instance, NeuConnect have published analysis that shows that the project could deliver a net reduction in carbon emissions of over 13MtCO2 over 25 years. It should also benefit consumers through enhanced competition.

This new source of power will not only support the UK to reach its net zero targets but also provide greater energy security for the country at a time when this is a key consideration for the UK government. The UK Infrastructure Bank noted in its recent strategy how the government’s energy security ambitions complement our climate change objective and our focus on clean energy as a priority sector. The Bank’s lending to the NeuConnect project also comes as the Energy Security Bill is brought before Parliament, introducing an ambitious package of energy measures to boost Britain’s energy independence and security.

Looking ahead, we expect there will be more projects like NeuConnect coming up; in December 2021 Ofgem invited bids for new interconnectors under the cap and floor regime. This could help bring in billions more investment as the UK seeks to double its interconnector capacity by 2030, providing greater energy resilience and helping to bring more renewables online.

The NeuConnect deal is another step forward for the Bank, showing its importance on a national scale. It’s been a fascinating project to work on so far, and we are looking forward to seeing how it develops.